For ease of project deployment, sasjs build brings all the compiled Jobs / Services / Tests together into a single file. Actually, 3 files, as follows:

The filename corresponds to the target name unless buildOutputFileName is specified.

If a jobs or services folder does not exist in the temporary sasjsbuild folder, then the sasjs compile step is also executed. The alias to run both compile and build steps is sasjs cb.

The benefit of having a seperate command to prepare the build artefacts (rather than bundling it into sasjs compile) is that you can then modify the compiled outputs to ensure you have the build you want - for example, removing tests for a production deploy. If you don't need such changes, then you can just run sasjs cb as a shortcut for both sasjs compile and sasjs build.

The JSON file is used by the sasjs deploy command for the SASVIYA serverType to create all the necessary folders, jobs, services & tests (and streamed web apps) in the target appLoc.

This is simply a zipped version of the target.json file, and is used when uploading apps or deploying projects to SASjs Server.

The generated SAS program can be executed directly in SAS 9 or SAS Viya to create all the jobs/services/tests programmatically. This is especially useful for Viya developers who are unable to obtain a client / secret. For SAS 9 it is the primary deployment method. 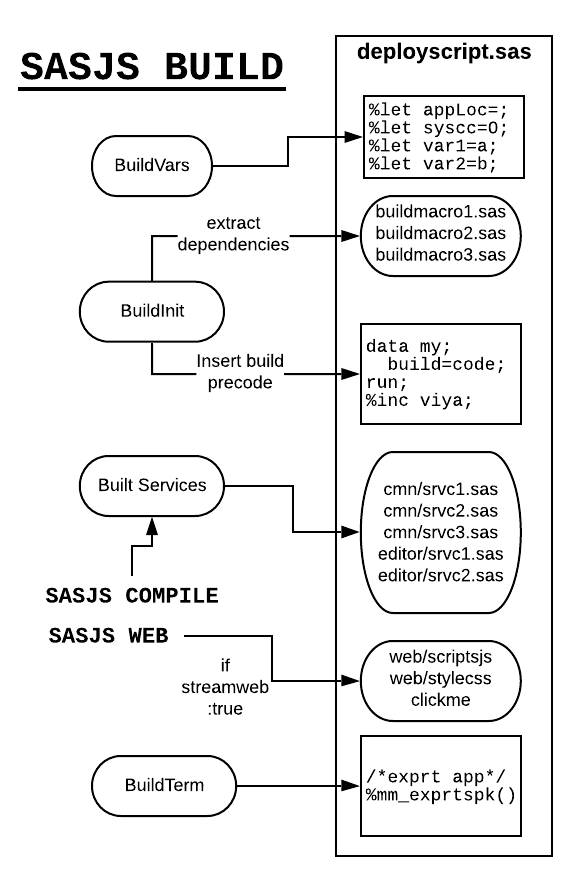 The SAS 9 Build Program can be executed in EG or SAS Studio, and also automatically as part of sasjs deploy when deployServicePack is true. You just need to have a runner in your metadata home directory, and to provide credentials using sasjs auth.

The .sas file can be executed in SASStudioV without modification as proc http will use the oauth_bearer=sas_services option to authenticate to the APIs. This is the way to deploy SASjs projects when you do not have a CLIENT or SECRET.

If for some reason you need to run the Viya build script in a non SPRE / Viya-enabled session (eg in SAS 9 or SASjs Server) you will need to prepare the access token - see guidance here: https://cli.sasjs.io/faq/#viya-token-macros

Put this access token in a macro variable called ACCESS_TOKEN and it will be used by proc http in the core macros by reference to the access_token_var= keyword parameter of each viya macro (the ones that start with mv*).

Saving security tokens in project repositories, especially if they are committed to source control, is a security risk - as anyone with access can use them to make modifications on the Viya platform. If you are running Viya code in non Viya-enabled SAS environments using the ACCESS_TOKEN approach described above, be sure to use a secure mechanism such as %inc from a secure directory, or another approved mechanism for securing these kinds of variables. Avoid writing Access Tokens to log files.